The following tribute was paid in the Faversham and North East Kent News published on 30th June 1917:

Mr and Mrs Henry Baker, of Hawkwood, Dunkirk, have also suffered the sad loss of two soldier sons.  Edward, the youngest, who was in the Royal Engineers, was killed in France on 20th April last. William, the second son, in the London Queen’s, has just died of wounds.  William was brought over from France on the 15th June, and passed away in King George’s Hospital on Thursday 21st.

He was buried last Monday afternoon at Dunkirk.  Much sympathy, for which they are very grateful, has been expressed with Mr and Mrs Baker in the great sorrow caused by this double loss in the space of only two months.

Mr and Mrs Henry Baker of Hawkwood, Dunkirk, suffered the loss of two sons in the space of two months, in the Spring of 1917.

Edward Baker is remembered with honour at Bully-Grenay

Both brothers are remembered with honour at the War Memorial at Dunkirk Church. In the 1911 census, Edward was shown as aged 16, still living at home at Hawkwood, and assisting his father Henry in his fruit growing business 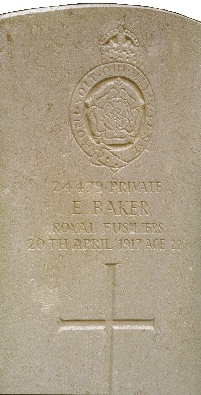 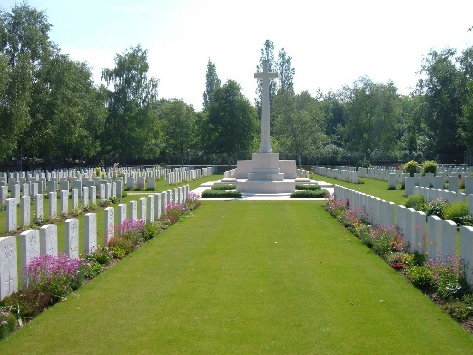 The Dunkirk Parish magazines of 1915/1916 briefly included a feature “NEWS FROM OUR BOYS SERVING WITH H.M. FORCES”, collected by the then headmaster of Dunkirk School W.V. Burgess. It includes the following mentions of this man:

September 1916 - Edward Baker has had a severe wound in the head. He is now at home on leave and will soon we hope be quite well again.

June 1917 - We deeply regret the death somewhere in France of Edward Baker. Our hearts go out in sympathy to his parents in their great loss, but they have the great comfort in knowing that their loss is his gain. He was always guided through life by a very high sense of duty to God and man, though strife and fighting were most repugnant to him. He never hesitated in answering to the call of his King and country. He will be long remembered by those who knew him in the Parish for his most devoted work for some years in our Sunday School.

National Archives in association with Ancestry.com.  1901 and 1911 England census