The following tribute was paid in the Faversham and North East Kent News published on 30 June 1917:

Mr and Mrs Henry Baker, of Hawkwood, Dunkirk, have also suffered the sad loss of two soldier sons.  Edward, the youngest, who was in the Royal Engineers, was killed in France on 20th April last. William, the second son, in the London Queen’s, has just died of wounds.  William was brought over from France on the 15th June, and passed away in King George’s Hospital on Thursday 21st.

He was buried last Monday afternoon at Dunkirk.  Much sympathy, for which they are very grateful, has been expressed with Mr and Mrs Baker in the great sorrow caused by this double loss in the space of only two months.

Mr and Mrs Henry Baker of Hawkwood, Dunkirk, suffered the loss of two sons in the space of two months, in the Spring of 1917.

Both brothers are also remembered with honour at the War Memorial at Dunkirk Church. In the 1901 census, William was shown as aged 15, living with his parents Henry and Amerzon Baker and working as an agricultural labourer 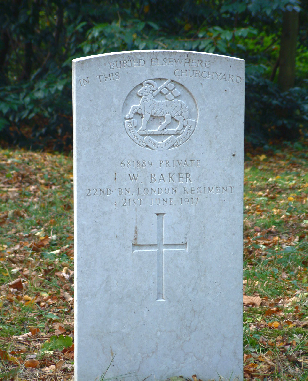 On Monday, June 25th, was laid to rest in our Churchyard the body of our late and much loved Vicar, Rev. W. J. Springett.  called him from our midst.On the same day there was also laid to rest the body of William Baker, the second son Mr and Mrs Baker have lost in this terrible war. The sympathy felt for them in their sad bereavement was shown by the number of parishioners present at the funeral service.