Alfred Branchett was the son of William and Phoebe Branchett of High Street, Boughton.  He was reported missing on 18 November 1916, the last day of the Battle of the Somme, but his parents did not receive official notification of his death until six months later.

In the 1911 census, Alfred  Phillips Branchett, was aged 14 and working as a grocer’s boy. Four years later, aged 18, he enlisted (on 5 December 1914), with the Royal East Kent Mounted Rifles (Duke of Connaught's Own), an old-established Yeomanry Regiment.

He did embodied (full-time) service, in this country until 21 September 1916, when he was posted to  the British Base Depot in France. He arrived at the Infantry base near Etaples the following day.  He was then transferred to the East Kent Regiment, The Buffs. Less than two months later, he was killed in action, on 18 November 1916.

Alfred Branchett was a painter by trade and was a member of the Boughton Division of the St. John’s Ambulance Brigade. He was also a Sunday school teacher at the  Primitive Methodist Chapel, Boughton.

Private Branchett is remembered with honour at Regina Trench Cemetery, Grandcourt, Somme, France, where his grave reference is IX. A. 15, and at the War Memorial at St. Barnabas Church, Boughton. 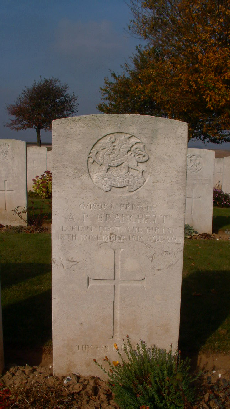 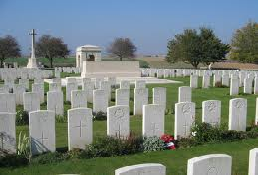 Three local men serving in the 7th Battalion of the Buffs lost their lives  on 18 November, which is recorded as the last day of ‘The Battle of the Somme 1916’,  Percy Arnold was one; the others were Frederick Brown and Alfred Branchett . Frederick Brown and Percy Arnold, both from Hernhill, are thought to have joined up, served and died together - they have similar service numbers (12981 and 12990)

The Battle of the Ancre 13–18 November,was the final large British attack of the Battle of the Somme in 1916, before the winter weather forced a pause in British attacks until the new year. It sought to capture Beaumont Hamel and Serre, and go some way to redeem the failure of 1 July and obtain ground on which the British would have a tactical advantage. The attack was the largest in the British sector since September and had a seven-day preliminary bombardment, which was twice as heavy as that of 1 July.

The 7th Buffs (East Kent) Battalion would form part of the action, alongside the West Kent and the Queens Regiments, and  alongside the 4th Canadian Division, whose war diary graphically describes the conditions: “During the night the first snow of the winter had fallen, and at 6.10 a.m. on the 18th November the assault was delivered in a whirling sleet which afterwards changed to rain.   More abominable conditions for active warfare are hardly to be imagined:  the infantry, dark figures only visible for a short distance against the white ground, groped their way forward as best they could through half-frozen mud that was soon to dissolve into chalky slime.  Little wonder that direction was often lost and with it the precious barrage, whilst the objectives, mantled in snow, were hard indeed to identify.   Observation from the air was impossible;  ground observers could see little or nothing, so that the batteries, in almost as bad a plight as the infantry, were, for the most part, reduced to firing their prearranged programme, regardless of the fortunes of the advance. To the sheer determination, self-sacrifice and physical endurance of the troops must be attributed such measure of success as was won.”

A detailed appendix to the Buffs’ Battalion War Diary describes how events unfolded. Having assembled in the snow earlier in the morning on 18th November with the rest of their brigade, the attack began at 0610 hours, but the assault companies were held up when subjected to intense enemy shelling and sniper fire. In Regina Trench, the 7th Buffs’ Headquarters, sheltering as best they could from the German barrage, waited for news from the assaulting companies but no information came back. and nothing was heard from them. The War Diary describes how several runners sent out to try to find out what had happened were killed or not heard from again. By mid-morning the headquarters staff, in Regina Trench, were becoming increasingly desperate for news and the Bombing Officer, 2nd Lt Howcroft volunteered to take a section forward to take a look. However, almost as soon as he left the trench he was shot by one of the German snipers.

Casualty returns for 7th Buffs for the period 18th to 21st November were 3 officers killed, 4 wounded and 1 missing with 23 other ranks killed, 76 wounded and 124 missing – 231 in total. The 7th Queen’s, to their left, suffered a similar fate, with the two assault companies being decimated by German fire.

The Battle of the Somme started on 1 July 1916 when thirteen divisions of Commonwealth forces, supported by a French attack to the south, launched an offensive.The attack met unexpectedly fierce resistance, losses were catastrophic and  the initial attack was a failure.

In the following weeks, huge resources of manpower and equipment were deployed. However the German Army resisted tenaciously and repeated attacks and counter attacks meant a major battle for every village, copse and farmhouse gained. Attacks continued throughout October and into November in increasingly difficult weather conditions. The chalky mud of the Somme area turned into a glutinous slime, and the onset of winter finally brought the allied offensive to a halt.