Private Brown was the son of John and Mary Brown of Dargate,  the husband of Hannah Brown of Forstall, Hernhill. In the 1901 census, his father John’s occupation was shown as a grocer on his own account; John and his three brothers were farm workers. By the time of the 1911 census, all the brothers had moved out and father John was back to his previous occupation of farm worker. John Brown was still living in Dargate, was married to Hannah and had two young children Ellen and William.  He and his brother Frederick Brown both joined the army; John was killed near Ypres in 1916 and Frederick had been killed on the Somme in 1916.

John is remembered with honour at the Menin Gate, Ypres, where his name appears on Panels 49 – 51 and both brothers on the War Memorial at Hernhill Church.

The Menin Gate bears the names of more than 54,000 officers and men whose graves are not known, and is one of four memorials to the missing in Belgian Flanders which cover the area known as the Ypres Salient,formed during the First Battle of Ypres in October and November 1914, when a small British Expeditionary Force succeeded in securing the town before the onset of winter, pushing the German forces back to the Passchendaele Ridge.

In 1917, in the Third Battle of Ypres, an offensive was mounted by Commonwealth forces to divert German attention from a weakened French front further south. The initial attempt in June to dislodge the Germans from the Messines Ridge was a complete success, but the main assault north-eastward, which began at the end of July, quickly became a dogged struggle against determined opposition and the rapidly deteriorating weather. The campaign finally came to a close in November with the capture of Passchendaele.

The site of the Menin Gate was chosen because of the hundreds of thousands of men who passed through it on their way to the battlefields. It commemorates casualties from the forces of Australia, Canada, India, South Africa and United Kingdom who died in the Salient prior to 16 August 1917. 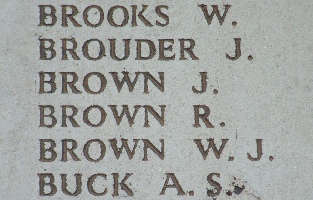 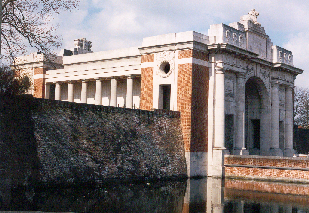 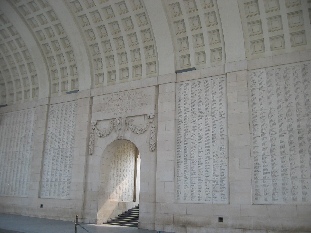 National Archives in association with  Ancestry.com.  1901 and 1911 England census database.