Herbert Button, known locally as Jack Button, was born in Tenterden in 1896, the son of George and Ellen Button, who in the 1901 census were licensed victuallers at “The Rose”, Kennington. In the 1911 census, the family were living at Mill House, Westwell, Herbert was 14 and his father was a commercial traveller, dealing in corn.

The Faversham and North East Kent News reported  that Private John Button, of the East Kent Yeomanry, had played cricket for three seasons for Dunkirk and before he enlisted in 1914 was learning farming at Bossenden Farm.

Private Button is remembered with honour at the Twelve Tree Copse Cemetery, near Gallipoli in Turkey, and on the Westwell War Memorial but not at Dunkirk. He was killed in December 1915, shortly before his squadron were to join the evacuation to Egypt.

Photo and caption from Patrick Gariepy - Members of "B" Squadron, Royal East Kent Yeomanry, near Tonbridge, Kent, after the outbreak of war in 1914. Private Jack Herbert Button, No.1649, stands to the right of the soldier marked with the "X." He served as batman to Lieutenant C.E. Hatfield at Gallipoli. On December 30, 1915, he was killed by a Turkish shell at Gully Beach, Helles, aged 19 years. 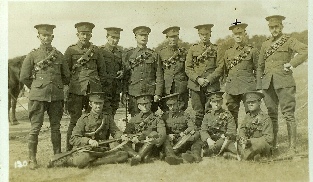 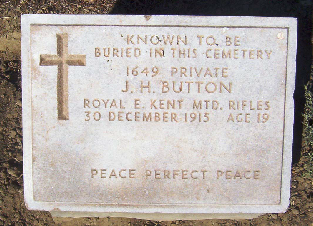 The Dunkirk Parish magazines of 1915/1916 briefly included a feature “NEWS FROM OUR BOYS SERVING WITH H.M. FORCES”, collected by the then headmaster of Dunkirk School W.V. Burgess. It includes the following mentions of this man:

December 1915 - Tprs. Norrie Harden and "Jack" Button, old Dunkirk cricketers, are together with the R.E.K.M.R. in Servia. They were both well when we last heard from them.

“Greater love hath no man than this, that a man lay down his life for his Friends."

We deeply regret to report the death by shell fire on the Gallipoli peninsula of Trooper Jack Button, R.E.K.M.R. His death took place at the early age of 19. He was a bright unassuming lad, and a member of our Cricket Club. He will be greatly missed by the Club, as he was one of our best fast bowlers, and almost unplayable sometimes. Always merry and bright, he was a good example of a Britisher and a Kentish man. and one of the first to volunteer for Active Service. Our hearts go out in sympathy to his parents in their severe loss, and may the Great God of Battles be able to comfort them with the thought that in giving his life for his Country he was copying the example of Him who gave his life for us. 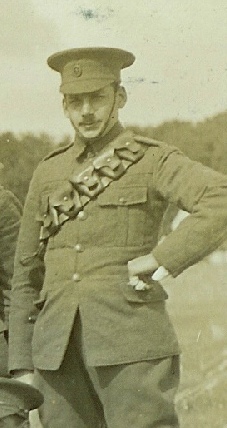 The eight month campaign in Gallipoli was fought by Commonwealth and French forces in an attempt to force Turkey out of the war, to relieve the deadlock of the Western Front in France and Belgium, and to open a supply route to Russia through the Dardanelles and the Black Sea.

The Allies landed on the peninsula on 25-26 April 1915; the 29th Division at Cape Helles in the south and the Australian and New Zealand Corps north of Gaba Tepe on the west coast, an area soon known as Anzac.

Despite local gains - at one point the line was pushed forward more than a kilometre - there was no breakthrough. By 13 July the advance at Helles was effectively over and the position remained unchanged until the evacuation in January 1916.

TWELVE TREE COPSE CEMETERY was made after the Armistice. There are now 3,360 First World War servicemen buried or commemorated in the cemetery. 2,226 of the burials are unidentified but special memorials commemorate many casualties known or believed to be buried among them, including the Memorial to Jack Button.  He is commemorated on Special Memorial A. 8.