James Harold Clinch, known as Harold, was the second of three sons of Mr and Mrs C.W. Clinch, of Wey Street Farm, Hernhill, who were serving in H.M. Forces. His elder brother, John Clinch, was killed in May 1917.

Private James Harold Clinch is remembered with honour at Thiepval Memorial, Somme, France, where his name appears amongst those inscribed on pier and face 12D to 13B.  He is also remembered at the War Memorial at St. Michael’s Church, Hernhill.

In a reference to Harold’s death in Hernhill Parish Magazine, the Vicar wrote:

“He was a young man of much ability, sterling character and great promise.” 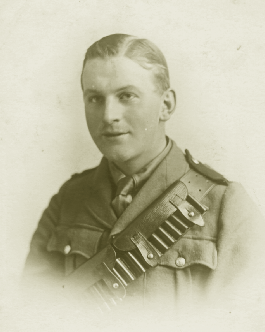 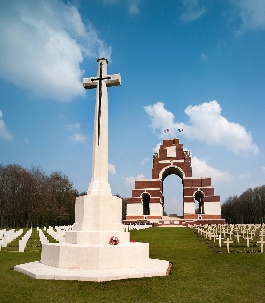 The late Guy Minter provided photographs and much fascinating background information about his uncles, John and Harold  (James Harold) Clinch, and the family farm at Weystreet:

“My uncles John and Harold Clinch on Hernhill War Memorial were the brothers of my mother, Maybell Elizabeth Clinch. She was a Sunday School teacher for many years, and she married my father William Minter, of Langdon Court, Goodnestone in 1915.

The Clinch family lived at Weystreet Farm, Hernhill, which my grandfather farmed and was well known as a very early strawberry grower. He told me the ladies started to pick soon after four o’clock in the morning in mid June, and the first loads would be taken to Faversham Station by horse drawn wagon, to be put in a goods van connected to a passenger train, by eight or nine o’clock. The strawberries were collected by Pickford vans at Victoria Station, and distributed to leading hotels, in time for lunch the same day!!

John and Harold were both volunteers in the Yeomanry.  John had married Grace Stevens, the sister of “Chip” Stevens, of Luddenham Court. They had no children, as he was soon sent to France.

Both John and Harold were killed in action, and buried in unknown graves, but I was always told it was in the great battles around Ypres and that they were remembered on the Menin Gate.*

My Grandfather was so upset at losing both his sons, that he retired from farming in 1919, as he could no longer walk the fields where his two eldest sons had grown up.

He bought Syndale Farm at Ospringe for his young son Charles.

My Father always told me that John (his Best Man at his wedding) and Harold were fine handsome men, great sportsmen, fair shots and skilled swordsmen.”

(*Our research has found that James Harold Clinch is remembered at the Thiepval memorial, and that John Clinch is buried in the War Grave Cemetery at Longuenesse, near St.Omer.)