Private Coachworth was the son of Mr and Mrs William Coachworth of Fostall, Hernhill, the youngest of four children. At the time of the 1911 census he was a farm worker at Waterham Farm, living with his mother and grandmother at Fostall.  He was also a bell-ringer at Hernhill Church.

Edgar Coachworth is remembered with honour at Etaples Military Cemetery, Pas de Calais, France, where his Grave reference number is XXX.D.8A. He is also remembered at the War Memorial at St. Michael's Church, Hernhill.

During the First World War, the area around Etaples, near the French coast south of Boulogne, was the scene of immense concentrations of Commonwealth reinforcement camps and hospitals.  In 1917, 100,000 troops were camped among the sand dunes and the hospitals, which included eleven general, one stationary, four Red Cross hospitals and a convalescent depot, could deal with 22,000 wounded or sick.  The cemetery is the largest Commonwealth War Graves Commission cemetery in France, and contains 10,771 Commonwealth burials of the First World War. 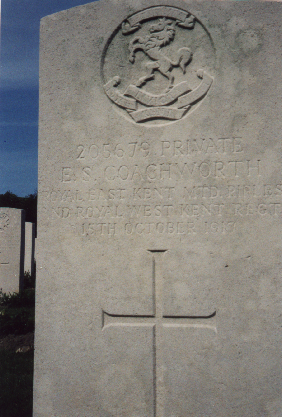 The following tribute appeared in the Faversham and North Kent News published on 17th November 1917:

Private Coachworth was the son of Mr and Mrs William Coachworth of Forstal, Hernhill.  He joined the East Kent Yeomanry just about a year ago, and went out to France in August, attached to the Royal West Kents.

He died of wounds on October 15th.   Deceased was 25 years of age, and before enlisting, was employed at Waterham Farm.  He was, for a long time, a bell ringer at Hernhill Church. 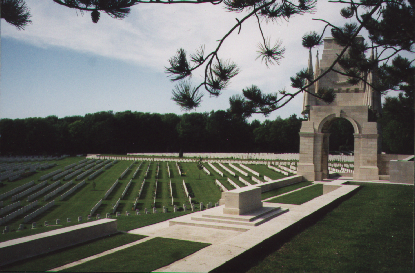 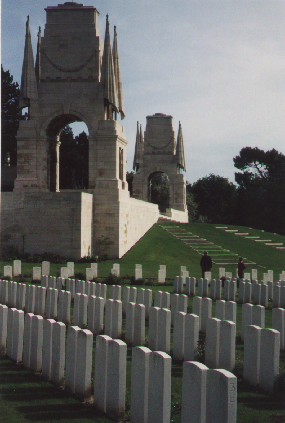