Theodore Coachworth was born in Hernhill an was the grandson of Mr William and Mrs Anne Coachworth of Forstall, Hernhill, and the nephew of Edgar Coachworth, whose name appears on the War Memorial at Hernhill. He seems to have lived with them from an early age, as he was there at the time of the 1891 census. At the time of the 1901 census he and Edgar were both living at Forstall; Theodore was 16 and was a horseman on a farm, Edgar was only 8.

At the time of the 1911 census Theodore was 26, working as a cowman, and living at 77 High Street Dover with the family of Henry Andrews, who was described a a coal merchant and Dairy Farmer and who was originally from Throwley.

Private Coachworth enlisted at Canterbury, first into the Queens (Royal West Surrey Regiment, then into the the Royal Welch Fusiliers

Theodore Coachworth is remembered with honour at the Vis-en-Artois Memorial, Pas de Calais, France, on Panel 6.  But his name does not appear on any of the local war memorials.

Vis-en-Artois is about 10 kilometres south-east of Arras.

The Memorial bears the names of over 9,000 men who fell in the period from 8 August 1918 to the date of the Armistice in the Advance to Victory in Picardy and Artois, between the Somme and Loos, and who have no known grave.

National Archives in association with Ancestry.com.  1891, 1901 and 1911 England census database. 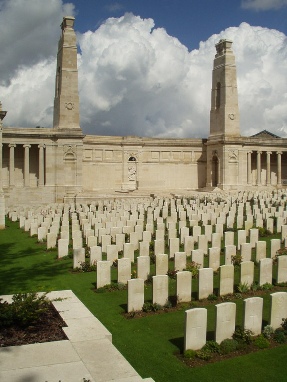