Edward Curling was the son of George and Sarah Curling.

Edward Thomas Curling was born in Hernhill in January 1894. and baptised at Hernhill Church on 1st April 1894. In the 1911 census, aged 17, he was living  with his parents in Horselees Road, Boughton. His occupation is shown as ‘pupil teacher elementary school, employed by County Council.’

Edward was following in the footsteps of his older brother William, aged 22, who was also a schoolteacher.

Lieutenant Curling is remembered with honour at Stockbridge Cemetery, Hampshire, and at the War Memorial at St. Barnabas Church, Boughton.

There are also ten war graves in Stockbridge, all in the no longer used cemetery on the Romsey Road and immediately East of Old St. Peter's Church. They mark the burial places of trainee pilots of the Royal Flying Corps, Royal Air Force and the Australian Flying Corps who were killed when learning to fly at nearby Chattis Hill Aerodrome and Lopcome Corner Aerodrome during late 1917 and 1918.

National Archives in association with  Ancestry.com. 1891, 1901 and 1911 England census database. 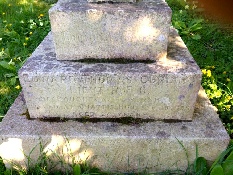