Robert Downs was the son of William Downs, of Church Cottages, South Street, Boughton. The 1901 census shows him, aged 12, in  his grandparents’ household in Dargate. They were Edward and Sarah Manktiloe.

In the 1911 census, Robert was aged 22 and is living at Brenley Farm House, Boughton under Blean.  His occupation was shown as ‘second man on farm.’

Robert Downs enlisted with The Buffs in Canterbury  but no attestation papers  have been found for him.  It is likely that they were destroyed by bombing during the Second World War.

Private Downs is remembered with honour at the Loos Memorial, Pas de Calais, where his name appears amongst those listed between panels 15 to 19.

The Loos Memorial commemorates over 20,000 officers and men who have no known grave, who fell in the area from the River Lys to the old southern boundary of the First Army, east and west of Grenay. On either side of the cemetery is a wall 15 feet high, to which are fixed tablets on which are carved the names of those commemorated. At the back are four small circular courts, open to the sky, in which the lines of tablets are continued, and between these courts are three semicircular walls or apses, two of which carry tablets, while on the centre apse is erected the Cross of Sacrifice. 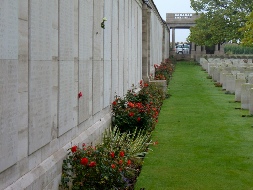 National Archives in association with Ancestry.com. 1901 and 1911 England census database.