Frank Foster was born in Boughton in 1898, and was brought up by his aunt, Mrs Downs, of Holly Hill, Blean. In the 1901 census he was listed as a “nurse-child” living with the family of William and Ellen Lancaster at Poplar Square Boughton and in the 1911 census he was living with John and Mary Downs at Holly Hill. In both censuses his name was spelt Forster.

Before enlisting in London he was a member of the Boughton Division of the St. John Ambulance Brigade, and was employed by Mr Dawes of Mount Ephraim. At a meeting of the Boughton and District Ambulance Brigade Minute held on August 4, 1914, (the note of which is reproduced on this website) a telegram been received asking for volunteers from the Division to join the Expeditionary Force. Members desirous of joining were asked to give in their names the following morning, and Frank, then aged 16, was one of six who gave their names.

Roeux is a village about 8 kilometres east of Arras. It was built over a system of caves which helped to make its capture in 1917 exceptionally difficult. The cemetery now contains 2,069 burials and commemorations of the First World War. 859 of the burials are unidentified.

The following tribute appeared in the Faversham and North East Kent News on May 26th 1917:

Frank Foster was of fine physique, and enlisted in September 1914 in the 1st Life Guards.  He went to France the following April, was wounded in January 1916, and invalided home.

Later, the King asked for volunteers from the Cavalry to form the Household Brigade.  The deceased was one of those who responded, and he again went to France in November.  The following month he was promoted from Trooper to Corporal.

Unhappily, he was killed on April 12th by a bullet, while charging the enemy’s first line, east of Arras. (Note - 11th April according to grave records)

Letters received by his aunt from his officers saw how much he was esteemed by them, and by the N.C.O’s and men of the signalling section of the Battalion.  They also say that he was one of the best signallers in the section. 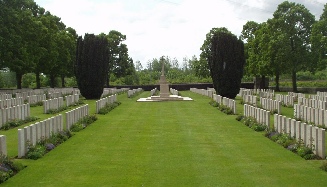 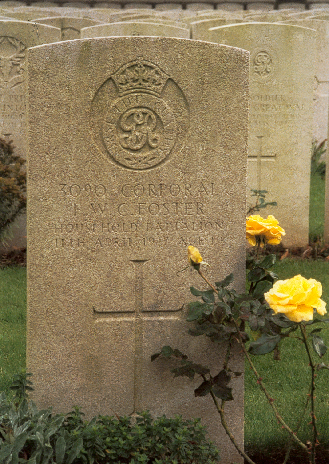 August 1915 - Frank Foster is with the 1st L G., also “somewhere in France." He says: "Sometimes we ride all night in full kit, and it is tiring work."

March 1916 - Trooper F. Foster, I.L.Gds. has been wounded in action, and, after being in hospitals in France and Brighton, is recovering his strength in a convalescent home at Lewes.