Rene Gosset came form a military family, and followed his father and grandfather into the army early in the war. He was the son of Colonel and Mrs Edward Gosset, of Dunkirk House, Dunkirk - now Courtenay House.  He was born in Camberley, Surrey in 1894 and baptised in the parish of Yorktown; at the time, his father was a Captain in the East Yorkshire Regiment. In the 1901 census he was living with his mother Mary in Branksome Terrace Bournemouth in the household of Mrs Sarah Jones. In the 1911 census his mother and father were living at The Gables, Eynsham, Oxfordshire, and Rene is remembered on the War Memorial there as well as at Dunkirk.

Rene followed in his father’s footsteps into the same regiment, and his army record shows that he embarked for France in September 1914 as a Second Lieutenant at the age of 19. When he died on the Somme in September 1916 he was an Acting Captain. In March 1916, he had announced his engagement to Irene, eldest daughter of Viscount and Viscountess Molesworth.

The 1st Battalion, The East Yorkshire Regiment (The Duke of York's Own) went to France with 18th Brigade, 6th Division, joining the BEF at the Battle of the Aisne. In November 1915 it was transferred to 64th Brigade, 21st Division with which it remained for the rest of the war on the Western Front. In 1916 They were in action in the Battles of The Somme, including The Battle of Morval in which the Division captured Geudecourt.

Captain Gosset is remembered with honour at Serre Road Cemetery No 2, Somme, France, where his grave reference is  XVI. G. 9.  There are now 7,127 Commonwealth burials of the First World War in the cemetery, mostly dating from 1916. Of these, 4,944 are unidentified.

The following tribute appeared in the Faversham and North East Kent News:

“Captain Rene Frankland Gosset, East Yorkshire Regiment, only son of Colonel E.F. Gosset, of Dunkirk House, whose death we recently announced, died while leading his company against the German trenches on the 25th September.

He was shot through the head and killed instantaneously, only a few minutes before his men were finally successful. His Colonel, writing to Colonel Gosset, states that ‘Captain Gosset set a fine example to his Battalion of courage and devotion to duty’.   The deceased officer was 21 years of age.” 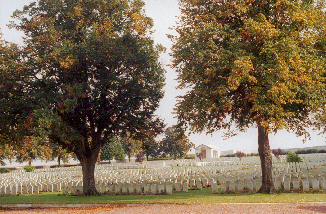 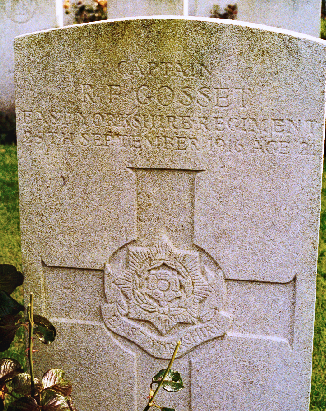 NEWS OF THE WORLD & EMPIRE NEWS

The Dunkirk Parish magazines of 1915/1916 briefly included a feature “NEWS FROM OUR BOYS SERVING WITH H.M. FORCES”, collected by the then headmaster of Dunkirk School W.V. Burgess. It includes the following mention of this man and his father Colonel Gosset:

August 1915 - Colonel Gosset has returned to duty after being at home on leave. Lieut. Gosset is home on sick leave.

November 1915 - Colonel Gosset, who relinquished his command, owing to ill-health, is now doing other important work for the Government. Lieut. Rene Gosset is on the recruiting staff at Faversham.

"GOSSIP of the DAY:  Much sympathy is going out to Lord and Lady MOLESWORTH'S pretty eldest daughter, Miss Irene Moleworth, one of many prospective Brides who have their fiances on the Roll of Honour, for Captain Rene GOSSETT of the East Yorkshiresm to whom she was recently engaged, has fallen.

Lord Molesworth's father was a clergyman, but he himself has been a soldier, and served in the TARAH expedition. His family dates from the time of the Crusades. Sir Walter Molesworth accompanied EDWARD the First to Palestine and the third Peer saved the life of the great Duke of MARLBOROUGH at Ramillies in 1706.

Lord and Lady Molesworth live at Walter's Hall near Ramsgate, where they are neighbours of the late officer's parents, Colonel and Mrs Gossett of Dunkirk House, Dunkirk."