Reginald Grainger was the son of Thomas and Eliza Grainger of Croft Cottage, Boughton, and the brother of Thomas Grainger, who would die in 1919. They were both born in Marshside near Chislet, where their father was a coachman.

Both brothers are buried  in Dunkirk Churchyard, and remembered with honour at  the War Memorial there. Both brothers were tragically invalided out of their respective service with tuberculosis.

Reginald joined the Buffs in Canterbury on 6 August 1914, giving his occupation as “Town Carman” and his age 21 years and 37 days. In his attestation papers he refers to previous service in the Royal Field Artillery, and a medical discharge on 1 August 1913. This may be the derivation of the information on his headstone, although the service number given there is recorded as the service number of his brother Ernest, who joined the Royal Garrison Artillery in November 1914, rather than his number in the Buffs - see below.

Reginald was given a new service number of 10211 in the Buffs, and passed fit for service. Nonetheless he was taken into hospital on 1 September 1914, and discharged from the army on 30 September 1914 as  “Not being likely to become an efficient soldier, under Kings Regulations para 392(iii)c”. He had been diagnosed with tuberculosis.

His discharge papers give his intended address as Horselees, Dunkirk, and list his family. In the 1911 census his father Thomas is shown as aged 80, a coachman, living with his wife Eliza aged 36 and other son Sidney, aged 15 and a milkman, at Pottery Cottages.

A fourth brother, Ernest Henry, was a year older than Reginald, and in the 1911 census was working and living as a groom/gardener in Lynsted. Someone under that name and the parents’ address would also seek to serve in the army; he enlisted in Canterbury to join the Royal Garrison Artillery on 12 November 1914, was passed fit and was given the service number 51061 which is shown on the headstone.He gave his occupation not as groom/gardener but as carman, the same as Reginald. Ernest joined the regiment in Newhaven and was posted to Devonport, but in April 1915 he too was deemed unfit for service having been diagnosed with tuberculosis and was discharged on the same grounds as his brother.

Is it possible that “Ernest” was actually Reginald, which is why the headstone combines Reginald’s name with Ernest’s regiment and service number? Or did CWGC simply get Reginald’s service details wrong, and Ernest had moved back to Horselees to take over Reginald’s job as carman? There is an additional clue in that the Roll of Honour now in Dunkirk Village Hall lists “R, S and T Grainger”, but not “E”. No further verifiable record has yet been found for Ernest, except that someone of that name was on the passenger list of the ship SS Baltic which left Liverpool on 1 May 1913 bound for New York. 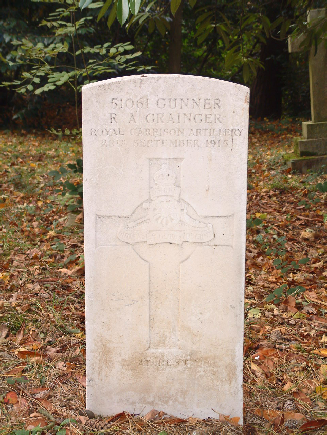 The Dunkirk Parish magazines of 1915/1916 briefly included a feature “NEWS FROM OUR BOYS SERVING WITH H.M. FORCES”, collected by the then headmaster of Dunkirk School W.V. Burgess. It includes the following mentions of this man and his brothers:

September 1915 - Reg. Grainger is somewhere at the Front. He has had a narrow escape, for a gun he was serving burst, and strange to say, although nine men were standing round it, not one was injured.

November 1915 - Pte. S. Grainger has spent his second birthday at the front.

December 1915 - We very much regret that we omitted to record the death of Gunner R. Grainger, R.G.A, in our last month's issue. He died while serving his king and country, and our sincere sympathies are with the parents in their great loss.

Tom Grainger has been home on leave.