Thomas Grainger was the son of Thomas and Eliza Grainger of Croft Cottage, Boughton, and the brother of Reginald Grainger, who had died in 1915. They were both born in Marshside near Chislet, where their father was a coachman.

Both brothers are buried  in Dunkirk Churchyard, and remembered with honour at  the War Memorial there. Both brothers were tragically invalided out of their respective service with tuberculosis.

Thomas joined the Royal Navy on 30 June 1910, giving his occupation as baker’s assistant. From 1911 to 1913 he served on the cruisers HMS Edgar and HMS Rosario in the Far East. He joined HMS Falmouth in February 1914.

HMS Falmouth was a Town-class light cruiser. She saw action in a number of major naval engagements of the war. On the outbreak of the First World War, she was assigned to the 5th Cruiser Squadron operating in the Mid Atlantic, in August 1914 Falmouth sank four German merchant ships and later that month was reassigned to the 1st Light Cruiser Squadron of the Grand Fleet.

Her eventful career came to an end on 19 August 1916 when she was damaged by U-boats off Flamborough Head, and sank the next day.

Within a month, Thomas joined HMS Weymouth, another cruiser, and this is the name on his headstone in Dunkirk churchyard. He stayed on this ship until the end of March 1918, when he was returned to HMS Pembroke in Chatham. He was discharged from the Royal Navy on 23 May 1918, having been diagnosed with pulmonary tuberculosis. 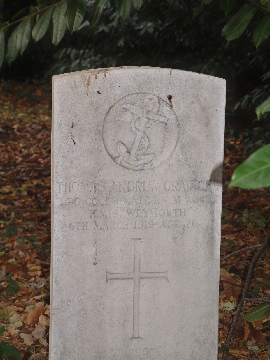 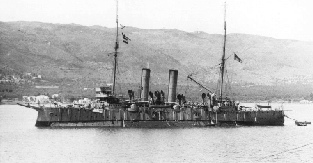 The Dunkirk Parish magazines of 1915/1916 briefly included a feature “NEWS FROM OUR BOYS SERVING WITH H.M. FORCES”, collected by the then headmaster of Dunkirk School W.V. Burgess. It includes the following mentions of this man and his brothers:

September 1915 - Reg. Grainger is somewhere at the Front. He has had a narrow escape, for a gun he was serving burst, and strange to say, although nine men were standing round it, not one was injured.

November 1915 - Pte. S. Grainger has spent his second birthday at the front.

December 1915 - We very much regret that we omitted to record the death of Gunner R. Grainger, R.G.A, in our last month's issue. He died while serving his king and country, and our sincere sympathies are with the parents in their great loss.

Tom Grainger has been horne on leave'