Wilfred Haslam was the only son of the late Rev. F. Haslam, Vicar of Hernhill (1905 - 1908) and Ethel Louisa Haslam. He was born in Rickmansworth, Hertfordshire in 1889. In the 1901 census, Wilfred was at Marlborough Publc School. In the 1911 census, Wilfred was living with his widowed mother in Orpington and was employed as an insurance clerk. He obtained his commission in the Royal West Kent Regiment in 1913.

Lieutenant Haslam is remembered with honour at the War Memorial at St. Michael’s Church, Hernhill, and on an inscription on his father’s grave in the churchyard there.

He is also remembered with honour on the Basra War Cemetery, in what is now Iraq. The Grave reference is IV. R. 20. The cemetery there contains 2,551 burials of the First World War, 74 of them unidentified. The headstones marking these graves were removed in 1935 when it was discovered that salts in the soil were causing them to deteriorate. The names of those buried in the graves affected are now recorded on a screen wall.

The following tribute was paid to Lieutenant Haslam in the Faversham and North East Kent News published on Saturday 26th February 1916:

Lieutenant Wilfred Henry Westcott Haslam, of the 4th (attached to the 2nd Royal West Kent Regiment, who was killed in Mesopotamia on February 7th, was the only son of the late Rev. F. Haslam, Vicar of Hernhill, and of Mrs Haslam, of Dagenham House, Newton Abbot.

He obtained his commission in the Royal West Kent Regiment in 1913, and on the outbreak of war, was sent to India, being transferred in August last year to the Persian Gulf. 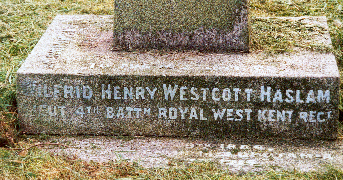 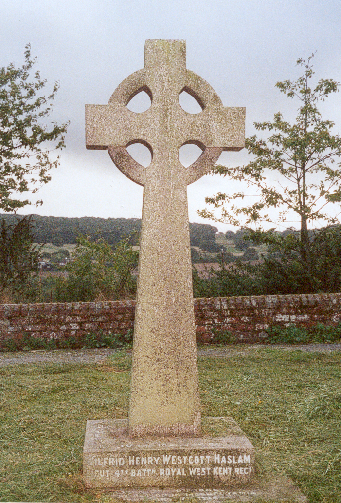