Robert Head was born in 1877 and was shown on the 1881 Census as the son of Robert and Sarah Head, of Horselees. In the 1891 Census he was 13, a dairy assistant, and living in Horselees (possibly next door) with his grandparents. He married his wife Janet Beatrice in Dunkirk Church on Christmas Day 1902, and in the 1911 Census his occupation was Farm Labourer, aged 33, living in Horselees with his wife and his seven year old niece Sarah Theobald.

The Commonwealth War Graves Commission records him as the husband of Janet Beatrice Head, of 88 Romney Rd., Willesborough, Ashford.

He is buried and remembered with honour, with a Commonwealth War Gravestone, south west of Dunkirk Church, but is not included in the names on the War Memorial, which had been unveiled in 1919.

No further details yet known. 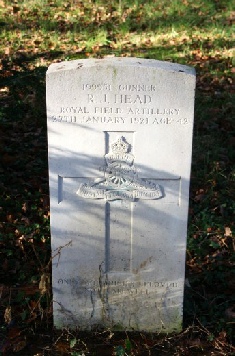