Frederick Horn was the son of Mr James and and Mrs Mary Anne Horn, of Forge Cottage, Staplestreet, Hernhill. He is thought to be amongst the boys sitting on the fence outside Forge Cottage in this picture below. He was baptised at St. Barnabas Church, Boughton, on 31 December 1893. In the 1911 census, Frederick, then 17, was described as a horse man on the farm, and his father James was farm bailiff. He had three brothers, Joseph (wagoner), Edward (farm labourer) and George (grocer’s errand boy)

The following tribute appeared in The Faversham and North East Kent News on Saturday 17th November 1917: -

Private Horn was a son of Mr and Mrs  J.T. Horn of Staplestreet. He was killed by a shell on 10th October.  It appears from letters received from his Colonel and a comrade, that he had been out all day carrying in wounded under heavy shell fire, and having come through this unscathed was resting in a "pillbox" (a concrete protection) when a weak part of the structure was struck by a shell.

Deceased, who was 24 years of age, joined the Royal Army Medical Corps in May 1915, having had experience of first aid work as a member of the Boughton Division of the St. John Ambulance Brigade.  Last year he was ill in hospital for a while, but went out again in October.

The Colonel in his letter says "he was a very gallant man and had done fine work in carrying wounded men to safety.”

A comrade, who has also written says "He was an excellent soldier, fearless of danger, always cheerful and his first thoughts were always for the care of the wounded.  Popular among all the boys, his loss will be keenly fell throughout the unit.”

Two other sons, and a son-in-law of Mr and Mrs Horn, are also serving.

Frederick Horn was a member of the Boughton Division of the St. John's Ambulance Brigade.

Private Horn is remembered with honour at the Tyne Cot Memorial, Zonnebeke, near Ypres, in Belgium where his name is inscribed on Panel 160.

He is also remembered with honour on a plaque to be found on the north wall in St Michael's Church, Hernhill, and at the War Memorial in the churchyard. 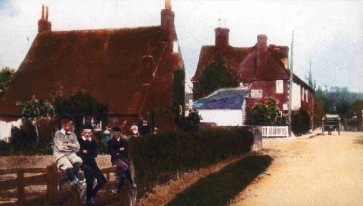 Philip Wamer in his book “World War One - A Chronological Narrative”

Tyne Cot Memorial to the missing, on which Frederick Horn’s name is inscribed, forms part of Tyne Cot Cemetery.

The Memorial is a semi-circular flint wall 4.25 metres high and over 150 metres long, faced with panels of Portland Stone on which are carved nearly 35,000 names of those who have no known grave.

The memorial forms the north-eastern boundary of Tyne Cot Cemetery, which was greatly enlarged after the Armistice when remains were brought in from the battlefields of Passchendaele and Langemarck, and from a few small burial grounds.

It is now the largest Commonwealth war cemetery in the world in terms of burials. There are now 11,956 Commonwealth servicemen of the First World War buried or commemorated in Tyne Cot Cemetery, 8,369 of these are unidentified. 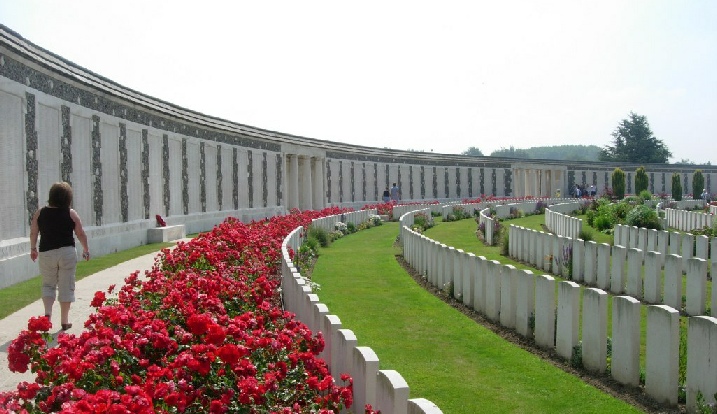 Passchendaele (or The Third Battle of Ypres),  one of the most appalling battles in history, took place between 31 July 1917 and October 1917.  British attacks on the 4th and 9th October, were part of an allied attempt to reach the village of Passchendaele.

The supreme courage of the field ambulance units who were there, is described by Philip Wamer in his book “World War One - A Chronological Narrative”.  "Stretcher bearers won universal admiration here, and elsewhere on the battlefield.  In normal conditions two men can carry a wounded man on a stretcher.  Here, it took sixteen men, in relays of four at a time.  In general, stretcher bearers were not fired upon deliberately, but the fact that they were walking, or rather stumbling, through mud, made them particularly vulnerable to shell fire."

Two men whose names appear on the war memorial at Hernhill,  served with the Field Ambulance of the Royal Army Medical Corps. Private Frederick Horn served at Passchendaele and Corporal Sydney Smith at The Somme.