Frederick Percival was the son of James and Mary Percival, of Fairbrook, Boughton. He was a former pupil of Boughton Wesleyan Day School, and had served an apprenticeship with Messrs Baldock & Co, at The Stores,  Boughton, before enlisting with the Royal Field Artillery. In the 1911 census he was 14 and working as a Grocer’s Boy, living with his parents at Fairbrook along with younger brother Alfred and younger sister Lily.

Private Percival is remembered with honour at Dantzig Alley British Cemetery, Mametz, Somme, France, where his grave reference number is VII. N5., and at the War Memorial at St. Barnabas Church, Boughton.

The village of Mametz was carried by the 7th Division on 1 July 1916, the first day of the Battle of the Somme, after very hard fighting at Dantzig Alley (a German trench) and other points. The cemetery was begun later in the same month and was used by field ambulances and fighting units until the following November. Dantzig Alley British Cemetery now contains 2,053 burials and commemorations of the First World War. 518 of the burials are unidentified

The following tribute appeared in the Faversham and North East Kent News published on 18 November 1916:

‘ Private Frederick Percival, son of Mr and Mrs James Percival of Fairbrook, Boughton, has also been killed in action.  He was 20 years of age and had just concluded his apprenticeship with Messrs Baldock and Co., at the Stores, Boughton, when he joined up.

‘The news of his death was received in a letter from an officer of his Battery, who states that “he will be a great loss to the Brigade, his cheerful ways having made him popular among all the officers as well as the men”.  Private Percival acted as servant to the officer who writes, and speaking of him in this capacity the officer says.  “Never again shall I find such a good, willing, cheerful and respectful boy.”

‘Deceased was an old scholar of the Boughton Wesleyan Day School, and Mr W. H. Wilson, the Headmaster, has often spoke of him in almost the identical words which the officer quoted above, has used.’ 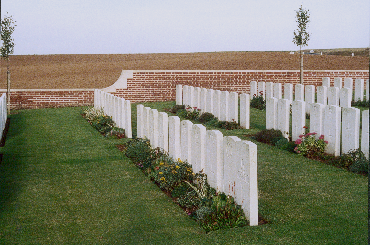 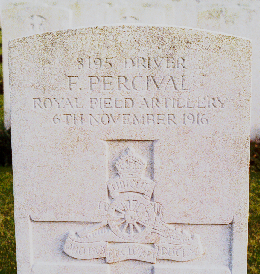