George Philpott was the eldest of 8 children of George and Sarah Philpott. He was born at Blean in 1898, and in the 1901 census the family lived there at Vicarage Lane. In the 1911 census they had moved to Adisham, where George’s father was a wagoner on a farm, and they later moved to Dargate.

He died in a military hospital in Dover and is buried in a Commonwealth War Grave at Hernhill Church.

Private Philpott is remembered with honour at the War

The following tribute appeared in the Faversham and North Fast Kent News on 16 June 1917.

The death has unhappily occurred before he had the opportunity of serving his country at the front, as he was anxious to do, of Private George Philpott, Training Reserves, son of Mr and Mrs Philpott of Dargate.

Not yet 19 years of age, Private Philpott joined up on his own accord, and had only been in the Army about a couple of months, when he died in the Military Hospital at Dover.  He was the eldest of  the eight children of Mr and Mrs Philpott. 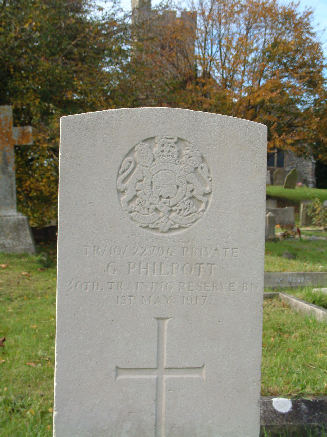