Private George Pout was the son of George and Sarah Pout, of Pleasant View, Dargate. On the 1911 census he was 21 and is shown as the oldest of eight children still living with his parents, at the Alms Houses, Dargate (also known as “Pleasant View”, and working as a groom. On 12 April 1912, he emigrated to Australia travelling on the Orient Line ship “Orsova” to Fremantle.

The above picture from the Western Mail of the “Medic” was taken on that day; the ship was well known by the Australian forces as it was a key troopship for Australia during the Boer War, some 14 earlier.

According to Australian Army records, George served at Gallipoli, but contracted dysentery, and was evacuated to Egypt, where after his recovery he was detached to work for the YMCA and at the Australian General Hospital in Cairo. He then travelled to England en route to the BEF in France,where he rejoined the Battalion in November 20 1917 and was there in Northern France until he was killed on 3 June 1918 near Hazebrouck.

The Australian Red Cross Society records of the wounded and missing has a number of letters and witness statements from his comrades, extracts from two of which are included on the right. He was working as a stretcher bearer when he was killed by a shell, possibly one of our own.

Private George Pout is remembered with honour at the War Memorial at St. Michael's Church, Hernhill, and on the Roll of Honour in the Australian National Archives. He is buried at Borre British Cemetery, Nord, France, where his grave reference number is II.A.5. The cemetery was used from May to September 1918 by field ambulances and fighting Units, particularly those of the 1st Australian Division, during the interval between the German and Allied offensives of that year. The cemetery now contains 367 Commonwealth burials of the First World War. 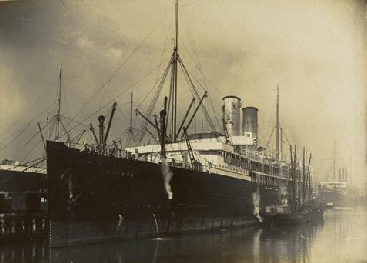 Extract from a letter from George Candy, on the Red Cross records (19 Oct 1918):

“ ……. He and I were working together as Stretcher Bearers in a small advance on the Merris front. We were lying in rear of our own platoon, a few yards apart waiting for the barrage to lift when a shell fell directly on Pout.

Being shocked somewhat myself by the explosion, I did not realise what had happened at the time, and in moving forward with the advance missed Pout. After consideration I went back to the place where the shall burst so near me, and found the remains of Pout. Post mortem recognition was impossible.

I gathered up his effects and helped carry his body to Battn HQ. I handed his personal effects, the chief items being a packet wallet and a bible, to the Secretary of our 3rd Brigade,  to whom Pout was personally known. This gentleman undertook to communicate with Pout’s people, mentioning that he knew deceased fiancee well ………..” 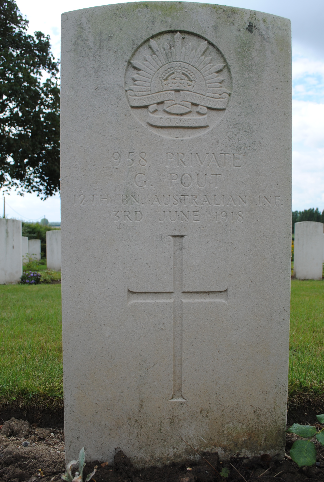 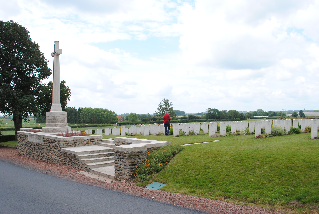