Private Ralph was killed during the Battle of the Somme. On 1 July 1916, supported by a French attack to the south, thirteen divisions of Commonwealth forces launched an offensive on a line from north of Gommecourt to Maricourt. Despite a preliminary bombardment lasting seven days, the German defences were barely touched and the attack met unexpectedly fierce resistance. Losses were catastrophic and with only minimal advances on the southern flank, the initial attack was a failure. In the following weeks, huge resources of manpower and equipment were deployed in an attempt to exploit the modest successes of the first day. However, the German Army resisted tenaciously and repeated attacks and counter attacks meant a major battle for every village, copse and farmhouse gained.  The Battle of the Somme finally ended on 18 November with the onset of winter.

The Thiepval Memorial, the Memorial to the Missing of the Somme, bears the names of more than 72,000 officers and men of the United Kingdom and South African forces who died in the Somme sector before 20 March 1918 and have no known grave. Over 90% of those commemorated died between July and November 1916.

The following item appeared in the Faversham and North East Kent News:

Private Albert Ralph, The Buffs, a married man who resided at Grove Cottages, Colonel’s Lane, Boughton, where his parents are also living, was killed in action on August 18th.

He joined up in December 1914, and went to France about a year ago.  He was home on leave at the latter part of March, returning to the front early in April.

Private Ralph was 34 years of age and leaves a wife and one child. 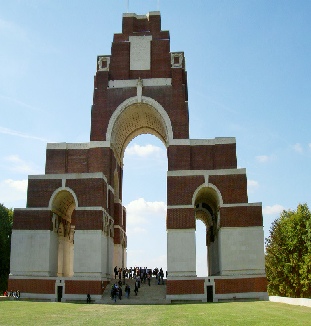 The Dunkirk Parish magazines of 1915/1916 briefly included a feature “NEWS FROM OUR BOYS SERVING WITH H.M. FORCES”, collected by the then headmaster of Dunkirk School W.V. Burgess. It includes the following mention of this man and his brother:

September 1915 - Albert Ralph is with the 8th Batt. Buffs at Farnborough.

December 1915 - Albert Ralph and Ernest Ralph are doing their "bit," one in the Buffs and the other in the R.E.K.M.R.