Private Percy Smith was born in Faversham in 1896 and was the son of William and Sarah Smith. At the time of the 1911 census he was 17, employed as a farm labourer and living with his parents and four younger children at Dale Farm Cottages, Hernhill. One of those children, then 14, was Sidney, who became Corporal S.A. Smith DCM, whose name also appears on Hernhill War Memorial. In November 1914, he married Agnes Pout, sister of George Pout and John Pout, who are also remembered on the Memorial, and went to live with the Pout family at Pleasant View Dargate (also known as the Almshouses).

He joined up at Canterbury in December 1915 and was sent to France in March 1916 to serve with the Northhampton Regiment; he was wounded in August, losing his fingers and was sent back to England. In 1917 his records indicate that he was medically downgraded whilst serving in the Middlesex Regiment, and transferred to serve in the Labour Corps, but was eventually discharged from the army on 5 July 1917 “As being no longer physically fit for military

The newspaper report of his death tells how he then contracted consumption (TB) and died  in hospital at Sittingbourne. According to the report of his brother Sidney’s death, his mother had by then moved to Foresters Lodge Dunkirk.

Private Percy Smith is remembered with honour at the War Memorial at St. Michael’s Church, Hernhill, and is buried in the churchyard.

The following tribute was paid to Private Smith in the Faversham and North East Kent News,  published on Saturday 30 November 1918.

The news of the death of Private Percy R. Smith, of Dargate, Hernhill, was received by his many friends with deep regret, and with much sympathy for his young widow.  Percy Smith, on joining the army, was drafted into the Northampton Regiment.  He went with that Regiment to France in 1916, and saw severe fighting.  He was severely wounded with the loss of fingers.

On returning home, he was employed in the home service for some time.  Signs of consumption made their appearance.  After a brave struggle against this disease, Private Smith was obliged to cease work, and he died in the military hospital at Sittingboume.

Private Smith is the second member of his family to lay down his life for his country.  His brother Sergeant S.A. Smith, who greatly distinguished himself, was killed some months ago. 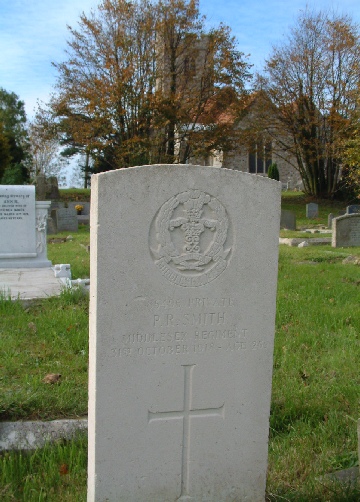