He lived in The Street, Boughton, with his wife and two children, and before enlisting, had been employed at Wellbrook Farm. He was the brother of Ernest Swinyard, who was killed in October 1918.

He is also remembered with honour at the War Memorial at St Barnabas Church, Boughton.

The following tribute was paid to Private Swinyard, in the Faversham and North East Kent News published on 25 May 1918:

A memorial service was held in St. Barnabas Church, Boughton, last Sunday evening, for Private Maurice Sidney Swinyard, Royal Fusiliers, who died of wounds in France, a few weeks back.  He was a son of Mr and Mrs Edward Swinyard, of Black Cottages, Colonel’s Lane,  Boughton, and he leaves a wife and two children, who reside in Boughton Street.

Private Swinyard, who was 28 years of age, was formerly employed at Wellbrook Farm.  He joined up in June 1916, and went to the front in May 1917. He was home on leave at the latter part of March last, returning to the front on April 2nd.  In his last letter, dated April 8th, he was expecting to go into the trenches again at any moment, and he evidently did so a day or two later, for on the 11th he was mortally wounded, being hit in the head and chest.

A letter received by his wife stated that he was quite unconscious when he reached the dressing station, and that he died on the 11th and was buried on the 13th in the military cemetery at Lapugney.

Private Swinyard had been wounded previously, being hit in the hand and arm, on the first night that he was in the trenches, and while in the act of helping a comrade.

Mr and Mrs Swinyard had two other sons in the Army, Charles Edward was with the Royal West Kent regiment in Palestine, and Ernest William was in the King’s Royal Rifles, in France.   They had both been serving since the early days of the war, and Ernest had once been wounded. 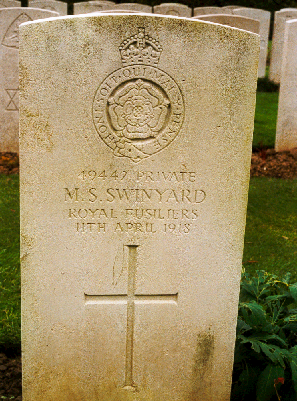 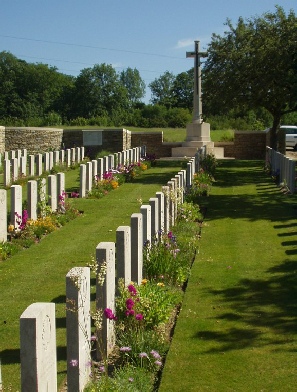