Herbert Edward Theobald was born in Boughton in 1877, the son of William, an agricultural labourer, and Charlotte Theobald. In the 1881 census, the family were living at Horselees Rd, Dunkirk.  Herbert was 4 years old and  there are two older  brothers, Thomas aged 12 and Frederick aged 9, in the household. Herbert also had an older brother, also called William, and in the 1901 and 1911 censuses Herbert was living with William’s family in Bermondsey and working with him as a leather dresser.

Herbert Edward Theobald signed his Attestation papers to join the Army Service Corps on 28 December 1914 at Faversham aged 37 years.   The Medical Officer who examined him reported that Herbert had “slight defects, but not sufficient to cause rejection.”    He was not immediately sent into action and his records show that he was ‘at home’ (in this country)  from 28 December 1914 to 25 September 1915.  He received  some training, before being sent to France, during which  a report shows that he was  a patient in the Connaught Hospital at Aldershot from 20 – 30 July 1915, suffering from impetigo,  which was treated with hot baths and hydrogen of ammonia.

Private Theobald  was sent to France on 26 September 1915 and was attached to the 77th Field Ambulance.

Early on the morning of 16 July 1918  there was a heavy thunderstorm, and  at 5.15 am Private Theobald was found lying dead at the foot of a tree which had been struck by lightning. This was confirmed in a witness statement made by Major William Wells.

Private Theobald’s next of kin was his father, William, whose address was Golbers Cottage, High Street, Boughton. William died  in December 1918.

Herbert Theobald is remembered with honour where he is buried at Huby-St Leu British Cemetery near Hesdin, where his grave reference is C4, and at the War Memorial at Boughton.

Huby-St Leu British Cemetery is 2 kilometres from Hesdin on the road to St Omer. In 1916 Hesdin became General Headquarters (2nd Echelon); the 59th Casualty Clearing Station was placed near the town in April, 1917-August, 1918. The British burials found in this cemetery were carried out mainly by two hospitals, by G.H.Q. Troops, or by units posted in the neighbourhood. 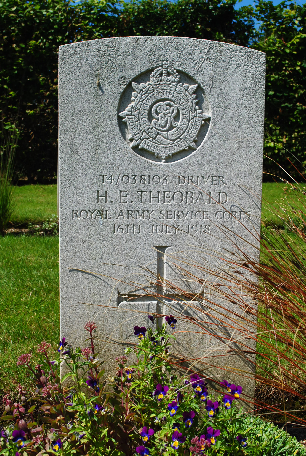 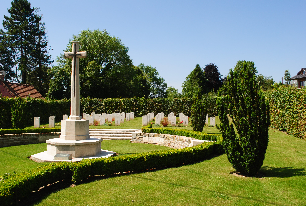 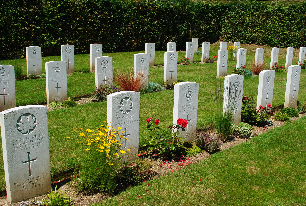