Thomas Theobald was the son of Annie Henrietta Theobald, of Boughton, Kent.

He is remembered with honour at the Chatham Naval Memorial panel 71, 3, and on the Boughton War Memorial

The “Faversham and East Kent News” reported on 29th October 1943:

“Official intimation has been received by Mrs Dunkin, of 11 The Crescent Boughton, that her son Acting Leading Stoker Thomas Charles Theobald, RN, who was reported missing in April last, must now be presumed to have been killed in action.

Ld. Stoker Theobald, who was a single man 25 years of age, joined the Navy before the war and had not been home for three years. He was educated at Boughton Methodist School and was working on the land before entering the Navy. He played both cricket and football for the Boughton club.” 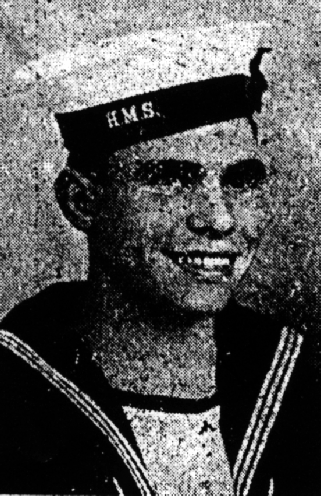 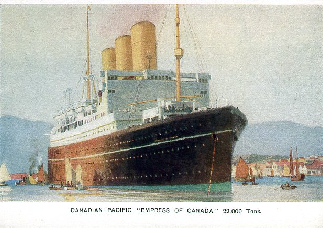 The ship Empress of Canada was  built in a Glasgow shipyard and launched in 1920.  She became part of the Canadian Pacific’s fleet on the trans-Pacific service between Vancouver and Japan, China and Hong Kong.

In 1939 she was requisitioned as a troop ship and on 1st March 1943 left Durban for England, with about 1800 people on board, including 400 Italian prisoners of war and 200 Poles who had been released by the Soviet Union after Germany invaded.

On the night of 13-14 March 1943, she was torpedoed twice by the Italian submarine Leonardo de Vinci, about 400 miles south of Cape Palmas, and sank within 20 minutes of the second attack.  There were 392 fatalities;  340 passengers, including a majority of the Italian prisoners, 44 crew and 8 gunners.

The survivors were taken to Freetown and from there resumed their trip to England on Mauretania.