William Edwin Tong was born on 22 April 1868, and was baptised at Dunkirk Church four days later. He

was the son of Isaac and Jane Tong, who in the 1881 census lived at Horselees.He married Kate Wilkinson, in the Medway area, in 1897.

He died from disease, in Malta, on 24 August 1918. His brother, living at 11 Woodside Cottages, Dunkirk, was notified of his death.

We are grateful to Gary Tong for providing the following information about his Great Great Uncle:he remembers that he used to live at Oast Cottages, (which became Martin’s Restaurant, now The Dairy), in The Street, Boughton, with his wife Kate.

Gary remembers his Grandfather telling him that William was a favourite uncle to his two nieces and his nephew (Gary’s Grandfather), as he always sent two shillings a week home, for them to buy sweets.

William Tong is remembered with honour where he is buried, at the Malta (Capuccini) Naval Cemetery, where his grave reference number is 384.

The Cemetery is opposite Valletta across the mouth of the Grand Harbour, and contains  351 Commonwealth burials of the First World War. The Royal Navy and Royal Marine War Graves Roll gives the cause of death as disease, and the next of kin being his brother, at 11 Woodside Cottages, Dunkirk. He is also remembered with honour at the War Memorial at St. Barnabas Church, Boughton. 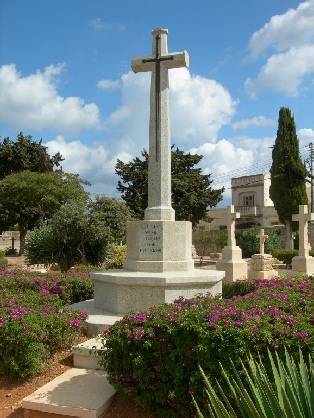