Arthur Waters was the son of Harry and Sarah Waters, the second youngest of seven children when he was born in Selling in 1895 and baptised at Selling Church on 26 May 1895, where his father was working as a shepherd. In 1901 the family were living in Stodmarsh. He was the younger brother of Herbert Waters, who was to lose his life early in 1918 after being diagnosed with tuberculosis and being discharged unfit. By the time of the 1911 census, Arthur and his younger brother were living with his parents at Bramling Hill Ickham, Arthur was working as a labourer on a farm. His brother’s address, and probably his parents address, in 1917 was given as Nine Ash Lane, Boughton. Arthur He enlisted with the Royal West Kent Regiment  in Faversham

Private Arthur Waters is remembered with honour at  Honnechy British Cemetery, Nord, France, where his grave reference number is I.C.5, and at  the War Memorial at St. Barnabas Church, Boughton.

Honnechy was part of the battlefield of Le Cateau in August 1914, and from that time it remained in German hands until the 9th October 1918, when the 25th Division and the 6th Cavalry Brigade captured it. It had been a German Hospital centre, and from its capture until the end of October it was a British Field Ambulance centre. The village was inhabited by civilians during the whole of the War.

The cemetery stands on the site of a German Cemetery begun in the Battle of Cambrai 1917 and used by German troops and then by British until the 24th October 1918. The 300 German graves were removed to another burial ground, leaving 44 British graves; and the cemetery was re-made. There are now over 450, 1914-18 war casualties commemorated in this site. Of these, nearly a quarter are unidentified. 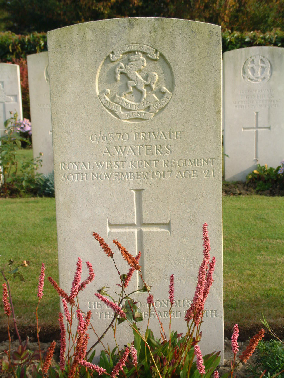 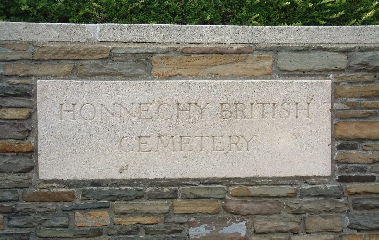 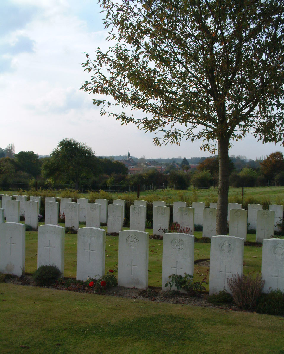