Herbert Waters was the son of Harry and Sarah Waters, the youngest of seven children when he was born in Selling in 1890, where his father was working as a shepherd. In 1901 the family were living in Stodmarsh, and there were three younger brothers, one of whom was Arthur Waters, who would later die in action in France.  By the time of the 1911 census, his parents had moved to Bramling Hill, Ickham, with the two younger children,

According to his army records, Herbert enlisted into the Rifle Brigade in June 1908 in Chatham, giving his occupation as labourer. He served in the BEF in France until May 1917, when he was diagnosed, on admission to Gosforth War Hospital, Newcastle, with tuberculosis as a result of cold and exposure . He was ruled unfit for further service through total incapacity requiring sanatorium treatment and was discharged from the army. His address at that time was given as Nine Ash Lane, Boughton, but in October 1917 he was at Keycol Sanatorium near Sittingbourne.

Herbert died in April 1918. He is buried in the churchyard at Boughton Parish Church, and remembered with honour at the War Memorial at St. Barnabas Church, Boughton. This was the second loss in a short time, to Mr and Mrs Waters, whose younger son Arthur Waters had died in action, the previous November.

Private Herbert Waters is buried in the churchyard at Boughton Parish Church, and is remembered with honour at the War Memorial at St. Barnabas Church, 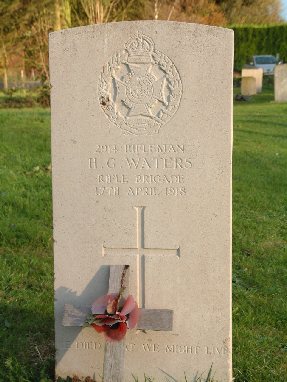 National Archives in association with Ancestry.com. 1891, 1901 and 1911 England census database.