No further details yet known

Peter Wright is remembered with honour at the War Memorial at Dunkirk.

HMS Achates was an A-class destroyer of the British Royal Navy launched on 4 October 1929 and commissioned on 27 March 1930. She was sunk on 31 December 1942 in the Battle of the Barents Sea.

In December 1942 she formed part of the escort for a convoy to Russia. On 31st December, the convoy was well to the north of Norway when two German heavy cruisers, ADMIRAL HIPPER and LÜTZOW attacked it. The destroyers escorting the convoy fought off the cruisers and prevented them damaging the merchant ships of the convoy. The Germans were then driven off by two smaller British cruisers. This was known as the Battle of the Barents Sea. During this battle, ADMIRAL HIPPER hit ACHATES with several large shells, causing heavy damage, whilst ACHATES was protecting the convoy. Despite efforts by her crew to save her, the destroyer sank soon after midday.

Lieutenant (E) Peter Alfred Wright was the Chief Engineer, and for his gallant efforts to keep the ship afloat was amongst those posthumously mentioned in dispatches.

In his book “Red Sky in the Morning: The Battle of the Barants Sea 1942”,  Michael Pearson writes:

“ By the time Hipper had switched her fire to Obedient, the situation aboard Achates was less than encouraging. Chief Engineer Peter Wright, his head and shoulders poking up over the starboard edge of the wrecked bridge, reported to Lieutenant Peyton- Jones that the ship had taken a direct hit just below. The shell had torn a gaping hole in the port side before exploding in the seamen's bathroom, putting the nearby' gunnery transmission station out of action and killing most of its crew. The explosion also fractured the after bulkhead of compart­ments already flooded earlier in the day, and extended the area of hull damage along the port side of the forecastle. A huge hole had been made in the ship's side abreast No. 2 boiler room, which had to be closed down and abandoned. Light and power in many parts of the ship had failed, and casualties had been severe. Decks and passage-ways were encumbered with the dead and wounded, but of James MacFarlane, the ship's doctor, there was no sign. It was assumed that he had been blown over the side as he journeyed between first-aid stations established at either end of the ship. Lieutenant Peyton-Jones ordered the crew to fall out from action stations, and for all available hands to assist Peter Wright in his efforts to restore what services he could and limit further flooding.'

By now Achates had taken on a 15° list to port, and being down by the head became difficult to steer. Nevertheless, with the aid of a boat's compass in the wheelhouse, it was possible to maintain a zigzag course across the stern of the convoy while laying a smokescreen; however, speed had reduced to 12 knots. Gun flashes could still he seen to the north and north-west, and at 11.45 a visual signal was flashed to Hyderabad to ask if the smokescreen was still effective. The reply was that it was 'most useful')

As time passed the list slowly increased, and as it did so more and more holes, as yet unplugged, sank below the water line. Eventually, at 13.00, Peter Wright reported to Peyton-Jones that, although the struggle still went on to save the ship, it was no longer possible to main­tain steam in the only' remaining boiler. Smoke stopped belching from the funnel, and Achates wallowed to a halt some 3 miles (4.8 km) on the starboard quarter of the convoy. The two men discussed the possibility of arranging a tow, and Wright went off to make preparations. Sadly, that was the last Peyton-Jones saw of the Chief Engineer. 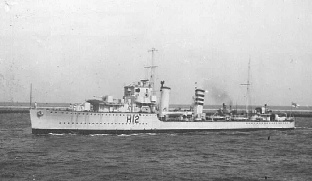 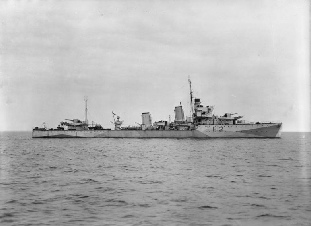